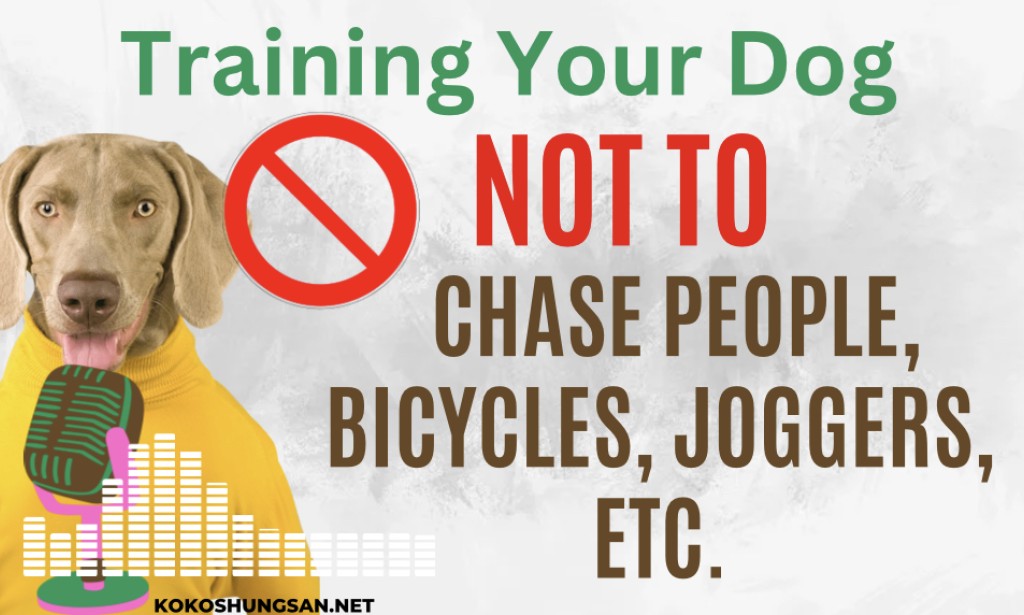 Training your dog not to chase people, bicycles, joggers, etc.

Training your dog not to chase people, bicycles, joggers, etc.

Training the dog not to chase people and bicycles is an important thing to do, and it is best to start that training as early as possible.  Starting when the dog is still small and non-threatening is important, particularly with breeds that grow very large, or with breeds that have a reputation for being very aggressive.  Many people respond to being chased by a dog, especially a large dog, with understandable fear, and it is best for yourself and your dog that he be trained not to chase before he reaches a threatening size.

Some dogs are easier to train away from chasing than others.  Breeds that have been used for hunting or herding often retain much more of their chasing instincts than other types of dogs, for instance.

No matter what breed of dog you are working with, however, it is important to not allow him off the leash until his chasing behavior has been curbed.  Allowing an untrained dog off the leash is dangerous, irresponsible and illegal.

Before you expose your dog to a situation where he will want to chase someone or something, be sure to train him in a safe, controlled area like a fenced in yard.  It is important for the dog to be able to focus and concentrate on you, and for him to understand what behavior you want.  The dog must be given the opportunity to repeatedly perform the behavior you want while in this controlled setting.

The training session should be started indoors in the dog’s home.  The dog should be put on a leash and the owner and the dog should stand at one end of a hallway or a room.  The owner then waves a tennis ball in front of the dog but does not allow him to touch it.  After that, the tennis ball is rolled to the other end of the hallway or the room, and the command “Off” is used to tell the dog not to chase the ball.  If the dog starts out after the ball, use the command “Off” once again and give a firm tug on the leash.

When doing this type of training, it is vital that the dog not be allowed to touch the ball.  If he actually reaches the ball, he may think that “Off” means to get the ball.  This exercise should be repeated several times, until the dog has learned the meaning of the “Off” command.  When the dog responds correctly by not chasing the ball, he should be rewarded with a special treat.

After the dog seems to understand his new game, move to another room and try the same thing.  Repeat the exercise in several rooms of the house, in the garage, etc.  After the dog has seemingly mastered the game and learned the meaning of the “Off” command, you can work with him without the leash, but still only in a safe area like your own home or a fenced in yard.  It may take some time for the dog to fully master control of his chasing instinct, and it is important not to rush the process, or to leave the dog off leash until you are sure he is fully trained.

To test the training in the real world, enlist the assistance of a friend to pose as a jogger.  It is important that the dog does not see and recognize this person; he has to assume that it is a stranger in order for the test to be valid.  Stand with the dog on his leash and have your friend jog by a couple of times while you do the “Off” exercise.  If the dog does as he is asked, be sure to provide lots of praise and treats.  If he starts after the “jogger”, give a firm reminder by tugging on the leash.

If any of you ever have any questions, please contact me or leave me a comment and I will do my best to answer it. I hope you will achieve your objectives! All the best to you!

Welcome to The Pet Academy. A radio for pet owners and pet professionals. Please subscribe and hit the notification bell for the latest updates. If you like it, please like, share it, and leave comments. Thanks For Your Support And For Helping Us Make The World A Better Place. Youtube: https://www.youtube.com/channel/UCoudDgizYbLc37dXm8Qck5w Podcast: https://spreaker.page.link/VPoUu6T3rG8QVrcEA