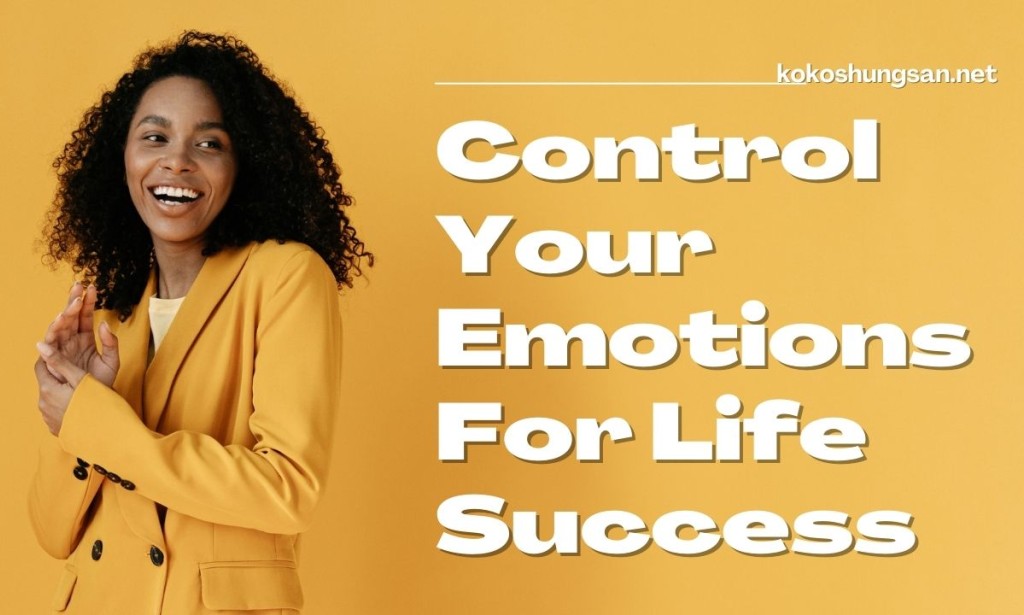 Gaining Control Of Your Emotions For Life Success

Gaining Control Of Your Emotions For Life Success!

Do you consider yourself as an emotional person? Do your emotions often make the best of you, controlling your life to the point that you no longer have any idea where you are actually going? Are your emotions the very reason why you find it difficult to deal with the different situations that happen day in and day out?

Most people today often find themselves tangled in different emotions and combine this with all the stresses of today’s life, it is only understandable when some end up consumed by their emotions.

But if you want to be truly successful, one of the important things that you need to learn is emotional equilibrium or the perfect balance between your emotions.

In this book, you can expect to learn about the different and most vital information that you need to know about your emotions in general and how you can fully control them and how to balance them properly for you to achieve your much coveted success.

Emotions seem to be like a king that rules your day to day life. The decisions that you make are based on whether you are happy, sad, bored, frustrated or angry. Your hobbies and activities are chosen based on the kind of emotions that they incite. But what exactly are emotions?

A Glimpse into the World of Emotions.

Aside from trying to understand what exactly emotions are, the researchers also tried identifying and classifying the various types of emotions. Paul Eckman, a psychologist, suggested in 1972 that there are actually 6 basic emotions that can be considered universal in the entire human cultures, namely anger, fear, disgust, surprise, sadness, and happiness. But in 1999, he further expanded the list, including some other basic emotions such as excitement, embarrassment, contempt, pride, shame, amusement and satisfaction.

In the 1980s, Robert Plutchik introduced the so-called wheel emotions, another kind of emotion classification system. In this model, it was demonstrated how various emotions can be mixed or combined together, in the same way that artists combine the primary colors in order to come up with secondary colors. He suggested that there are actually eight primary emotional dimensions, including fear versus anger, sadness versus happiness, disgust versus trust and anticipation versus surprise.

These emotions can then be mixed in various ways. For instance, anticipation and happiness can be combined to create excitement.

But what are really the purposes of your emotions? What do they do for you? Certainly, these have an important effect on you but what are these all for?

Your Emotions are Your Motivation.

Your emotions motivate you. Without them, you will never be able to do much, thus, you will not survive, which is applicable to the evolved form that you are now. Your body can feel motivations.

Your muscles either relax or tense. Your blood vessels contract or dilate. When you feel emotional, you can also feel this physically. It means that your emotions can either make you comfortable or uncomfortable, sending signals for you to do something right away or just stay in your comfortable state.

Your Emotions are Your Social Signals.

In general, people wear their hearts on their sleeves as their inner emotions are being displayed on their outer bodies. Your face in particular has about 90 muscles wherein 30 have the main purpose of signaling your emotions to others. These signals are very useful for they let other people decide how to behave toward you. When you look angry, those around you will never think of attacking you.

Your Emotions Serve as Internal Signals.

Welcome to Internet Marketing Academy. Learn Internet Marketing and Grow Your Business With KOKOSHUNGSAN®. Please subscribe and hit the notification bell for the latest updates. If you like it, please like, share it, and leave comments. Thanks For Your Support And For Helping Us Make The World A Better Place. Youtube: https://www.youtube.com/channel/UCY7dAgTOvhm5fdXFiz814tg  Podcast: https://www.spreaker.com/show/internet-marketing-academy