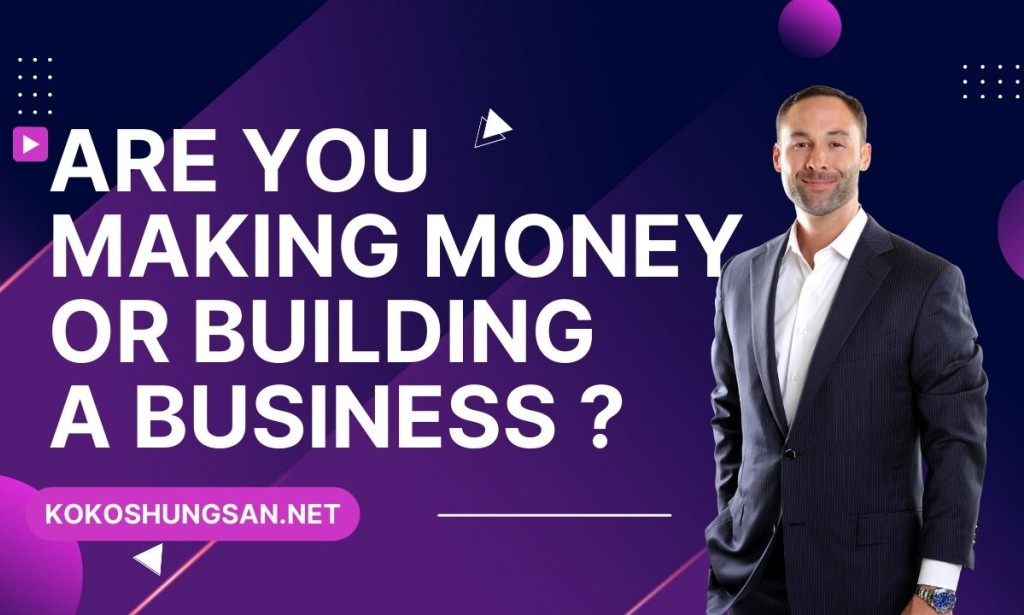 ARE YOU MAKING MONEY OR BUILDING A BUSINESS?

ARE YOU MAKING MONEY OR BUILDING A BUSINESS?

There is a difference, you know!

In fact, people that don't recognize the difference within a year after starting their business will suffer for this lack of knowledge until they do.

Let me give you an example to help you fully understand what I'm talking about.

Suppose you went out this afternoon, purchased a computer system and some start-up business software at your local Office Max. You come home -- all excited -- ready to get your new business going. (Everyone has experienced this same type of feeling.) It gives you a great exhilarated feeling to finally take the first step to making your dream become a visual reality.

This excitement continues and mounts bigger day after day. You are so totally absorbed into your new business that you start forgetting about your normal, daily life. Your wife or husband calls you to come to dinner and you say, "In a minute." However, your "minute" turns into three hours. (I guess, at this point, you could say that you're "hooked.")

After several weeks (or months) of this behavior, your family starts feeling very neglected. Or, if you don't have a family, perhaps your neighbor George or cousin Alisha might start feeling you are mad at them or whatever.

Your wife, husband, kids, neighbor George or cousin Alisha would never admit they feel "neglected" -- but the feeling is there just the same. After they have reached their tolerance level, they normally will start talking to you. They might ask, "How's the business doing?" You'll probably say, "Oh, great! I think I can really make this work."

But the very next question out of their mouths will be, "How much money are you making?"

Now, whether you are working on anything specific or not, you have placed an invisible (and perhaps impossible) goal for yourself. You now believe that in order for you to prove to your family, neighbor or whoever, that you are NOT a failure, you have to show them CASH IN HAND! But . . .

Nothing Could Be Further From The Truth!

Making money and building a business are two DIFERENT things -- especially when you are just starting to build a business.

When two big corporations, for instance, decide to merge and become one, they always lose money in the first year or so. But in the third year they make more money than both companies had ever dreamed possible. It was worth the two-year loss! In fact, that's how you make money -- by investing.

Investing money is not the only way to make your business boom. Hard work and sacrifice is another way of investing. In other words, if you don't have money to invest, you have to WORK for it. Plain and simple. If you're looking for a way to have your cake and eat it too, you'll end up a fool at the short end of the stick! Promise!

I know these are NOT words you want to hear. But whether you accept them or not is your choice. My job has been done. I have revealed the truth to you and I hope you accept it as fact.

"Loss leader" is a term used in business. It simply means selling a product (at a loss to the company) in order to make money further on down the road. All companies use this method in one form or another. It SHOULDN'T be used as your only way of marketing -- but it should play a major role.

My two-disk package, "Immediate Business on Two Disks," was a loss leader for me. It costs me $2.25 to copy and mail a two-disk set that sells for $3. I only make 75 cents for my time and trouble. That's not very much. However, about 25% of the people who purchase the two- disk set turn around and order the entire disk- based series for $75.

As you can easily see, my loss leader marketing technique produced more money in the long run -- which is much more than I could have made if I was only intersted in how much money I was making -- rather than building my business.